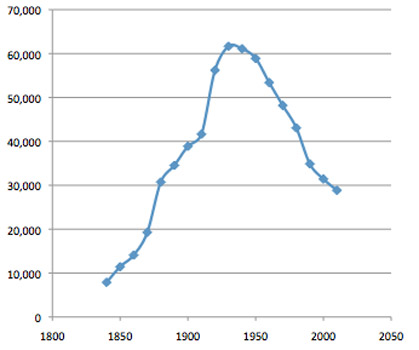 This chart shows the steady growth of Wheeling's population up to 1930 and 1940 when it stabilized at about 61,000. Since then the population has declined every census period. 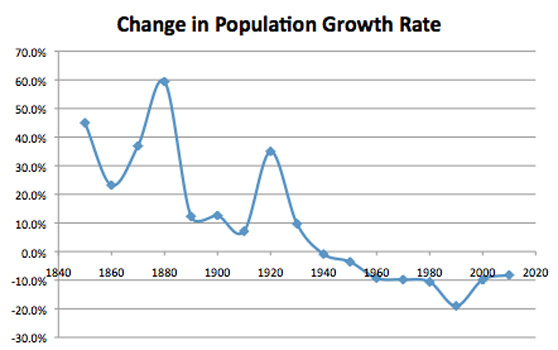 This chart plots the rate of change of Wheeling's population. The overall trend of the line is downward towards the right, which means that the rate of growth has slowed overall since the beginning of census data collection. There are two huge reversals of that decline in growth rate, in the 1860s and 1870s, and again in the 1910s. SInce 1940 the population growth rate has been negative, meaning that the population is decreasing. If there is any good news it is that the rate of decrease - which was 19% during the 1980s has slowed down and during the first decade of the 21st century the rate of loss was lower than any time since 1950. Is Wheeling beginning to turn around?


Economy
To understand Wheelings growth - and decline* - it is necessary to see what industries and businesses there were and how successful they were over time.
As a starting point here is a list of the largest manufacturing activities from the 1907 WV Commissioner of Labor report.
I am looking for current data, but I think there are now zero glass, cigar, pottery and brewery companies...