In the early 1900s the house was divided into two - a narrow 653 on the north, and a wider 653 1/2 on the south. The south side was lived in by the Raab Family for a number of decades; the Zimmerman family lived in and owned the north side until the fire in 1996. Info from Ross Frazier, Feb 2011. 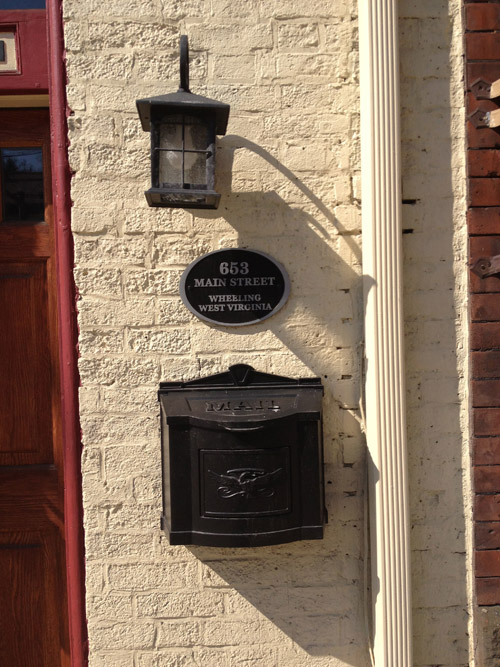 1797: Area of 653 Main in first addition to original Old Town Wheeling.
1818: National Road reaches Wheeling, coming down 7th St and turning south on Main, in front of 653 area.
1831: Construction of Arthur & Hannah Phillips House based on date stone on sandstone lintel of 2nd floor window. Andrew Jackson president of the USA.
1832: Arthur M. Phillips, one of the first steam engine builders in the West, started building engines for boats constructed by Elijah Murray. Engine works (foundry, pattern shop and boiler works) were behind house at lower lever where Providence Green Apartments are today. Dozens of boats were built here.
1834: Wheeling water system installed in North Wheeling, using 14” iron pipe and steam powered pump. Reservoir was between 7th and 8th streets, east of Lane C.
1836: Wheeling incorporated as a city.
1843: Phillips forced into bankruptcy during national panic or depression. House and business auctioned, with three Phillips sons buying them. Addition of 655, 657 and 659 homes for Phillips sons.
1849: Wheeling Suspension Bridge built –reputedly the first in the world.
1852: Son Hans Wilson Phillips buys family foundry business.
1852: The Intelligencer newspaper founded.
1852: Arrival of B&O Railway in Wheeling.
1859: Arthur Phillips appointed Inspector of Boilers and Hulls by President Buchanan.
1861: Arthur Phillips & two sons vote for Virginia to seccede from Union as Civil War begins.
1861: Arthur Phillips removed from inspector position by President Lincoln.
1863 Jun20: West Virginia becomes 35th state with Wheeling as capital.
1869 Feb 23: Arthur Phillips dies at age 85 and funeral was held at 653 Main before burial at Mt Wood Cemetery. Ulysses Grant president of USA.
1870: Map showing 853 House and Phillips steam works. Ulysses Grant president of USA.
1873: Hans Phillips sold business and riverfront property to Wheeling Centripetal Company and sometime later the rail yards replaced the Phillips engine works area at bottom of the hill.
c. 1900: House split into two properties, 653 and 653½ (larger portion).
1901-1902: Wheeling city directory lists residents as 653: Krippahne, Henry; 653½: Phillips, D.Z.; 653½: Camp, Dr. C.E.; 653½: Breaker, Dr. J.S. Adjacent 655 included: Phillips, Miss Nellie B.
1911-1912: Wheeling city directory lists residents as 653: Wm. J. Welshans; 653½: Chas. W. Liephart; 653½: Clarence Hanna (2nd fl.). Albert D. Moser lived on the first floor of 655.
1918: 653 and 653½ houses sold outside the family and divided into apartments owned by W.H. Zimmerman, Jr (653) and Mary J. Moore (653½).
The House at 653 North Main street is where the Zimmerman/ Frazier family lived and owned from 1918 to when I gave the fire damaged building to the city of Wheeling at no charge. We, the family of William Henry Zimmerman and Della Inbody Zimmerman, and Ada E. Zimmerman Frazier, daughter of William and Della appreciate the renovation done by Mr Chuck Wood, now the owner of the building.
1985: 653½ sold at auction for $3,000 to Debby Shondrick. Ronald Reagan president of USA.
1988: North Main St certified as National Historic District.
1996, Aug 12: Fire at 653 and 653½ Main – I think it is safe to say it is a total loss, according to Fire Investigator Mike Witt. Bill Clinton president of USA.
2004, Jan: After being abandoned nearly 8 years, Jeanne and Ken Weisenborn purchase 653 and 653½. They cut down a tree growing through the roof, removed fire debris and tore down remaining roof and back wall, replacing them with a new steel roof and new brick wall. Plywood floors, room divisions and wonderful 12 over 12 front windows installed, but Weisenborns decide not to make this their home. George Bush president of the USA.
2005, Oct.: Vera Uyehara and Chuck Wood buy property from Weisenborns and reunite two properties into a single family home. Architects Steve Avdakov and Wills–Loustau redesigned the interior, and Dick Knecht Construction company rebuilt the structure between Dec 2007 and Dec 2008. George Bush president of the USA.
2009, Jun 20: First public showing of renewed Phillips House to Friends of Wheeling. Barack Obama president of USA.

Much of this information has come from Thad Podratsky, home owner and historian of North Main Street.
Compiled by Chuck Wood, July 2009

Actually, the house was one residence when owned by the original builder, Arthur Phillips. It has a date of 1831 over the north entrence. Phillips owned and built steamboats on what is now the apartment complex and old rail yard. Originally the house was free standing with a porch wrapping aroung the north,west and south sides. If you look at a 1870 map of Wheeling, you can see the house clearly. My grandparent William and Della indody Zimmerman purchased the property in May of 1918 from a granddaughter of Phillips. You could see a grand staircase that was visable along the north and west wall in the front room [north entrence] The 653 1/2 entrence was add sometime in the late 1800's. Originally the house was only two rooms deep, and two wide, again in the late 1800's the porches were enclosed which made it 3 rooms deep. It had 4 stories, including a very big attic.. It was one of the very early houses in Wheeling. Kitchens were on the ground floor, not Main street, It had until 1918 only one outside privey for both sides in the back yard. Bathrooms were added in 1918. Phillips also built the house at 655 Main, the Moser residence, Sarah Moser was the longtime gym teacher at Wheeling Hi. Sarah was a greatgrandaughter of Arthur Phillips. Have more but this is getting to long.

Some more from Ross:
In the late a 1960's and early 1970's, a group from out the Pike, bought 653 1/2 and devided it into 4 apartment's. Cause much damage to our side. even broke through the connecting walls in attic and basement and tried to use the space. Put in a new bathroom, that leaked between floors and caused the kitchen ceiling to fall in. Not to pleased with how they did the repair job. I wasn't in Wheeling to oversee the work. Had I been, we wold have owned that side also.